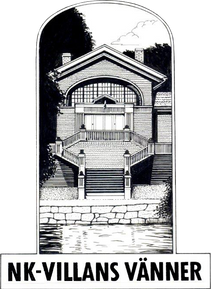 WELCOME TO THE NK VILLA

Here you will find exciting exhibitions and a cosy café.

Even though the NK Villa has been situated in the same place for more than a hundred years it took until 2006 before it was opened to the public. It is an imaginative building in Swiss style with the outside covered with scaly panel work. The architect was Ferdinand Boberg. He was one of Sweden's greatest architects of his time. Some of his work can be found in Stockholm, e.g. "Rosenbad" where the Swedish government resides.

The NK Villa was designed as an exhibition space for the Nordic Company for an industrial show in Norrköping, 60 km south of Nyköping, in 1906. Here they displayed "the newest and most exclusive furniture and interior decorations for the exclusive circle of customers which the Nordic Company primarily aimed themselves at". After the exhibition the villa was moved to Nyköping and given to the employees of the NK workshops, which had been established in the town some years earlier.

Another speciality was interior decoration for ships. For the MS Kungsholm, The Swedish America Line, they made library furniture of palisander (Brazilian rosewood) with silver intarsia. And once the Shah of Iran ordered a whole railway carriage. The luxury can hardly be described.

Once upon a time the NK workshops were Nyköping's largest industry. Cabinet-makers, chair-makers, metal workers, upholsterers, gilders, sculptors, polishers and chasers were some of the occupations represented. On the premises were also a sawmill, timber yard and fire station.

In their leisure time the employees could visit the villa. Here meetings and festivities were arranged. The villa had a library and you could play chess, bridge, backgammon and other games. The villa was also home for the NK orchestra and the housewives' leisure. In 1946 the first nursery in Nyköping was opened on these premises.

1973 saw the end of the NK workshops. Production ceased and most of the buildings were pulled down. Today there is only the NK-villa and an office building left.

Nowadays the NK Villa is run by a non-profit organisation, that wants to make the NK Villa a living contribution to the cultural life of Nyköping by preserving and developing its activities.

The villa is open to exhibitions, concerts, lectures and other events.